Need Help?
You can submit a puzzle to a web site forum to get help directly from within the program.
Read More

The long and interesting history of the Sudoku is quite a puzzle in itself.

The name Sudoku or more correctly 数独 comes from Japan and consists of the Japanese characters Su (meaning 'number') and Doku (meaning ‘single’) but it was not invented in Japan. Sudoku originated in Switzerland and then traveled to Japan by way of America.

Sudoku has its deep roots in ancient number puzzles. For many centuries people have been interested in creating and solving them. Puzzles continue to stimulate new development in mathematics, as you can see in the film A Beautiful Mind ➚.

Magic Square puzzles which involve the ordering of consecutive numbers into a square, comes to us from the mists of history.

The Magic square ➚ is first documented in China two thousand years ago. The puzzle is both a numerical and positional problem, as all the rows, columns and diagonal lines through the grid must add up to the same number. Just as in Sudoku a number can only be used once in the grid. The aim of the puzzle is to try to devise a new ordering of the numbers to complete the puzzle starting from scratch. Solutions were considered to have mystical properties and became part of the Chinese I Ching (Book of Changes) ➚ method of telling the future.

The 3x3 solution shown is called the Lo Shu diagram ➚. It was regarded as the gift of the turtle from the River Lo ➚ (the turtle had the magic square inscribed on its back). This image was first printed in the first or second century CE. The magic square reached Europe from China by way of the Arabs who brought news of many of the Chinese inventions with them along the Silk Road ➚. Thabit ibn Qurrah ➚ (ninth century CE) is credited with introducing the magic square to the Western World.

In Europe the first unequivocal appearance of the square is in Albrecht Dürer's ➚ engraving called 'Melancholia' ➚ in 1514 where a 4x4 magic square is clearly shown with an arrangement of the first sixteen numbers gives a sum of 34 in all rows, columns and both diagonals. Any philosopher of the renaissance age would have understood the properties of magic squares.

Dürer's Magic Square: All rows, columns and diagonals add up to 34 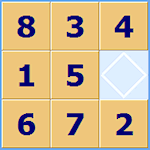 It is worth mentioning in passing the Chinese Puzzle ➚ that may well be familiar to you, it consists of a 9x9 grid of squares with one square missing.

The squares are scrambled and have to be shifted one at a time to form an ascending numerical sequence 1 to 8. The early versions used the digits 1 to 8 with the 9 missing but modern ones have pictures (which comes to the same thing). Like Sudoku it is a matter of finding a strategy to put the squares into a particular order.

The great mathematician Leonhard Euler ➚ is the man chiefly credited with the creation of the puzzle that we now know as Sudoku. Born in Basle,Switzerland ➚ in 1707 just after the giant leap forward in mathematics pioneered by Isaac Newton ➚ and Gottfried Leibniz ➚, he both consolidated and pioneered mathematical knowledge in many fruitful areas. He moved from Basle to St Petersburg, Russia to study medicine but by the chance happenings of fate he became the chief mathematician at the St Petersburg Academy ➚. In 1741 he went to Germany for 25 years before returning to the Academy in Russia where he died at the grand age of 76. Even though blind for the last seventeen years of his life he still made important discoveries.

Euler turned his mind to all sorts of mathematical problems. Amongst other things he is responsible for the ratio of a circle's circumference and diameter pi ➚ being denoted by the familiar Greek letter π and also i to denote the square root of -1. His pioneering work on imaginary numbers ➚ using this new notation transformed key fields of mathematics.

May be only as a hobby, Euler developed the basics of ‘Sudoku’ which he termed ‘Graeco-Roman Squares’ or Latin Squares ➚ - he used letters as the grid square symbols rather than numbers. He mused on what would happen if you removed the rule for magic squares that the sum of the diagonals must add up to the same number as the rows and columns and turn it into a puzzle of permutations. His thoughts on the subject were first published in 1782 in Verhandelingen uitgegeven door het zeeuwsch Genootschap der Wetenschappen te Vlissingen 9, Middelburg pp. 85-239. This dissertation was probably first given as a lecture to the Academy on October 17th 1776.

The first four letters of the Greek alphabet α; β; γ and δ are combined with Latin alphabet a; b; c and d so that each occurs once in each row and column. In this case the Greek letters occur once in each region too.

Euler's immense legacy of pioneering study has been much used by mathematicians and scientists ever since but the obscure puzzle he created was not taken up by contemporaries, not even as a pastime.

A brief and localized version of ‘Magic Squares’ appeared as a newspaper puzzle between about 1890 and 1920 in France. Then a new variation was developed that removed some of the numbers from a Magic Square leaving the solver to work out what was missing. Because the puzzle required arithmetic rather than position it is rather different from ordinary Sudoku. This was further refined to use the numbers 1-9 (like Sudoku) but it did not catch on.

It took another fifty years before the puzzle was introduced by Howard Garns ➚ in the American Dell magazine. As in every good story the puzzle took on an extra twist. Instead of requiring just rows and columns to be permutations, a new rule was introduced that split the grid into 9 regions of 3x3 squares and these regions must also have a unique occurrence of each number. This makes it a more challenging and interesting problem for people to solve. Howard Garnes called the puzzle Number Place when it was first published by Dell Puzzle Magazines ➚, New York in 1979.

Over the Pacific to Japan

It did not take long for the puzzle to move to Japan. Although the Japanese like brain teasers as much as anybody else, it is believed that it is the property of the Japanese language ➚ itself that caused Sudoku to undergo its final transformation.

The Japanese language is a little tricky for crosswords as it is symbolic rather than phonetic. It is not so easy to devise a grid of crossword letters ➚ in the same way as you can in English. So the Number Place puzzle in Dell Puzzle Magazine had great potential as a replacement for the familiar crossword puzzle in Japanese newspapers and magazines.

The American name Number Place was translated as 数字は独身に限る Sūji wa dokushin ni kagiru meaning 'the numbers must occur once only', but quickly became abbreviated to 数独 or in Western script Su Doku 'number only' or 'number single'. In April 1984 it was first printed in Monthly Nikolist ➚ magazine and it soon became a very popular pastime.

The Japanese added another element to the Sudoku puzzle. They imposed the rule that the pattern of revealed squares had to be symmetric and not just random (for more on symmetry please read our Sudoku symmetry page). They also stipulated that at least 32 of the 81 initial squares in regular Sudoku should be revealed to give a reasonably tough level of difficulty. Although the first computer program to generate and solve it was developed to in 1989, the best puzzles are still reckoned to be devised by human skill and ingenuity.

Sudoku's journey has been traced from China, through Persia to Europe and then across the Atlantic to New York. After it jumped over to Japan it then became a great craze in the U.S. and Europe, being published in most newspapers and magazines with championships and conventions all over the world. It is one of the few puzzles that can claim to be truly international by nature. It has no cultural baggage and just needs a logical mind to solve it.

The Characters for Sudoku

If you know the Japanese language you may know that the Su Doku characters 数独 are actually ones that originated from Chinese. These two characters have the same meaning in China (number single) but in Mandarin Chinese (pinyin) would be pronounced shùdú. The written version of the characters tells a tale that goes back into the mists of history. The first character Shu ➚ is in two parts. The phonetic radical is lou ➚ 娄 consists of the two characters ‘middle’ above ‘woman’ and denotes ‘leisure’ (possibly representing a woman in the middle of nothing). The second part of Shu has 夂 is ‘strike’ represented by a hand with a stick. These two parts together denote ‘number’ perhaps symbolizing counting by scratching marks on the ground. The second character 独 is the one for du ➚ or ‘only’. It consists of two parts, the first symbol (radical) is for a dog 犭 that is used for many wild creatures and then 虫 which mean ‘insect’. These two parts together represent ‘only’ or ‘single’. It is the simplified form of 獨 ‘du’.

“Failure is only the opportunity to begin again, this time more intelligently.”