We've added our own unique twist to the Sudoku puzzle. The puzzles generated by Sudoku Dragon can have a row or column or region in the solution arranged as a stripe with all the numbers in order (or in reverse order).

This is provided as an option within the Sudoku Dragon program when you generate a new puzzle. Here are some examples of puzzles with the stripe shown. 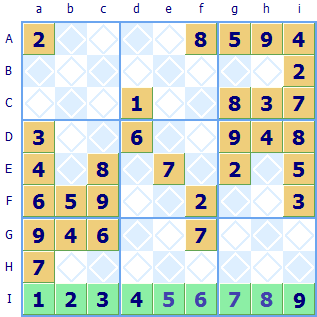 In this puzzle the stripe is hidden away in the last row - Row I (the 9 is highlighted). The Sudoku stripe can be in normal or reverse order and in any row or column. 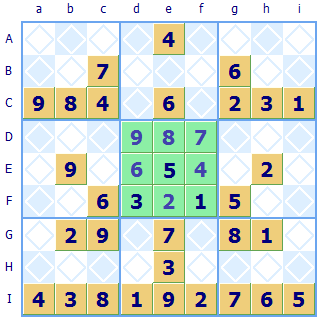 The stripe can also be wrapped into a region or mini-grid. The middle region Dd has the numbers 1 to 9 hidden as a sequence in reverse order. This one was much harder to find. 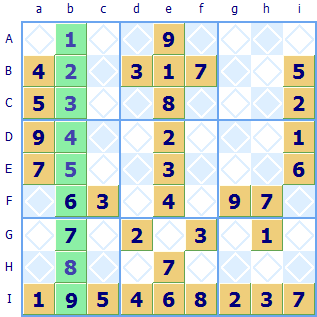 And just not to leave out the columns, here is one with the Sudoku stripe in column b. Once spotted they can unblock the solution of otherwise intractable problems.

We hope you'll enjoy solving our puzzles with the Sudoku stripe as it adds a new addition to your solution strategy. Finding where the stripe is located will generally unlock a number of grid squares. Our challenging puzzles often make it tricky to work out where the stripe is hidden.